Three construction companies have been fined after a worker suffered fatal injuries while demolishing a two-storey building in preparation for a development project.

The incident occured on the 13 October 2016 and the subsequent investigation undertaken by the Health and Safety Executive (HSE) found that: 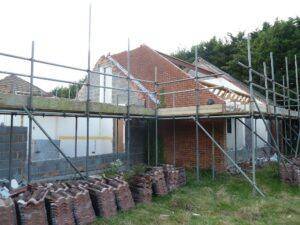 In addition, inadequate provision was made to prevent falls from height, despite concerns raised by workers in the days leading up to the incident.

Portsmouth Crown Court heard how David Shayler, an employee of Ryde Demolition Limited, was removing roof timbers by hand with a colleague, when a gable wall partially collapsed causing him to fall backwards striking his head against a stack of roof tiles.

Stoneham Construction Limited of St Johns Place, Newport have pleaded guilty to breaching Regulation 13(1) of the Construction (Design & Management) Regulations 2015 and have been fined £56,667 and ordered to pay costs of £12,004.42.

Speaking after the case, HSE inspector Dominic Goacher said: “This was a tragic and wholly avoidable incident, caused by the companies’ failure to implement safe systems of work.”

“Demolition is a high-risk activity whose safe execution is complex and technical and where expertise is vital. The risk of unintended structural collapse is well known within the industry. Demolition requires careful planning and execution by contractors who are competent in the full range of demolition techniques.”

“Falls from height remain one of the most common causes of work-related fatalities in this country, and the risks associated with working at height are well known. In this case the risks of structural collapse and falling from height were not controlled, which led to the preventable death of a father-of-two.”

Further information about carrying demolition out safely can be found on HSE’s website: https://www.hse.gov.uk/construction/safetytopics/demolition.htm

During the Covid-19 Crisis –

The HSE permitted First aid certificate extensions in a number of circumstances i.e. if you held a a first aid certificate that expired on or after 16 March 2020 and could not access requalification training because of coronavirus, you may have qualified for an extension. This applied to:

To qualify for the extension, you must have been able to:

The first aid training industry in England is now confident that enough courses are now available for all required requalification training to take place. HSE has therefore agreed a final deadline for requalification for these qualifications of 30 September 2020.

If because of coronavirus your training was interupted and you were unable to complete the training for your first aid qualification within the usual certification timeframe, training can restart at a later date as long as:

Requalification training in Scotland and Wales

It is accepted that training capacity in Scotland and Wales, and for some parts of the emergency services across Great Britain, might take longer to build.

The HSE however still strongly recommends that the practical elements of the actual FAW, EFAW and requalification courses are delivered face to face, so that competency of the student can be properly assessed.

If you are working on the highway in any capacity then you should be aware that the new ‘Passport’ scheme has now gone live and that it may well impact you in some capacity, particularly if you operate in the construction sector.

The new highways passport scheme went live on the 01st August 2020 and anybody working under the control of a Principal Contractor for a Highways England funded project or scheme (online and offline) who would normally receive a project or scheme induction in accordance with CDM 2015 will be required to utilise it, although there are currently a few exemptions such as: delivery drivers, maintenance personel, etc at this time.

The scheme which has been fully endorsed by Highways England and the Supply Chain Safety Leadership Group, has been brought into force by ‘Reference Point and Mitie’ – the companies behind Network Rail’s Sentinel Safety Solution and service and HS2’s Validate Safety Scheme.

The aim of the scheme is to:

It will deliver a single smart solution for the highways workforce; transforming how the competency of those working on the road network is assured and consistently improve standards within the industry.  The scheme claims to utilise trusted and improved technologies to both capture and deliver real-time information enabling workforces to be more effective and safe whilst on site.

Workers will be required to carry a smartcard that will be linked to the ‘passport’ database which in turn will provide a single and transferable real-time competence record, that can be checked daily confirming each workers ability to work in real time.  The system will cover induction training and all other skills, licences and competencies held by an individual allowing training to be aimed at the right individuals at the right time whilst also allowing individuals to confirm their competencies through the presentation of their card.

A spokesman for ‘Reference Point’ (the providers of the SkillGuard system) stated that there are also plans in place to discuss the linking of the scheme with the Construction Skills Certification Scheme (CSCS) card software – so watch this space!

Further details with regard to how it may impact you as an individual or a company can be found here!

For the most part I am sure that we would all agree that the coronavirus pandemic has had a devastating impact within the UK.  Indeed, it is still being felt throughout most areas of the country, some more so than others, by both people and industry alike.

The government is now however looking forward and attempting to get the ‘country working again’ in an effort to boost the economy.

As a result, and in partnership with industry (TrustMark and the Construction Leadership Council) they have produced new guidelines for tradespeople/households in order to promote safe working in and around people’s homes.

The guidelines are easy to follow and recognise that providing for safety as a result of Covid-19 is not just the responsibility of the construction company/tradespeople it employs, but that homeowners and tenants also have their part to play with regard to staying safe and controlling the spread of the virus.

The campaign includes a video which can be viewed here: Work Safe – Safe Work.

Additionally, the Guide can be downloaded here.